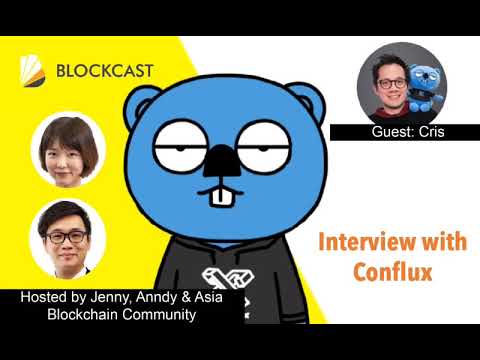 Anndy: Everyone here = smart to be in this industry. Tell us more about Conflux, what problems it solves? What is the application scenario? What is your happiest and saddest moment while developing it?

Chris: Sure! Let’s have a look at Bitcoin and Ethereum. Bitcoin solves the problem of having a secure and decentralized digital asset recognized by many people – BTC Ethereum solves the problem of automating tasks involving the decentralized digital assets through smart contracts, current hypes like liquidity mining are not doable on the Bitcoin network.

What both of them fail at is: scaling! As their networks are easily congested, the transactions fees are high (limiting the number of users using the network, and the throughput is nowhere close to visa or mastercard (if we need a target of a truly global payment system)

Conflux Network is not reinventing the wheel, but improving it, keeping the best from all worlds and upgrading it so that everyone can enjoy the benefits and to explore unknown territory! And all this, while being secure, decentralized and fast.

Anndy: How different in terms of specs and deliverables when compared to Eth and BTC?

Chris: Exactly. And since Conflux Network is smart-contract compatible, developers can also do more than Visa.

Anndy: Fast is one aspect. The ability to scale is good. With such speed, what kind of use cases are you working on? Taking over NASA? LOL

Chris: Hahaha, Not for now, but maybe in the future!

Jenny: Keep my fingers crossing on that!

Anndy: Real business application is the draw for Conflux. Eager to hear.

Chris: A well-known Chinese aircrafts company will be storing their data on Conflux, so that they will have an immutable audit-trail of their data. One major aspect we are working towards is DeFi and in the long-term, our aims are to realized faster remittances for everyone!

Anndy: Is Conflux working with BSN in China too?

Chris: This we can disclose in a couple of months

Anndy: The blockchain and crypto market have been changing. What do you want to see in the near future for this industry?

Another team is working on FLUX, a lending and borrowing platform. We are reaching out to different stable-coin projects for integration so that more people around the world can use it.

With our transaction costs being 1000x lower than Ethereum, you can use any amount you want to experience DeFi unlike on Ethereum, where some smart contract execution cost up to 34 USD yesterday.

In the future, I see User adoption, better regulations, increased user-experience, fewer scams, and real-use-cases that can benefit everyone!

Anndy: If one of the future scenarios is to reduce the cost of the transactions, it will be wonderful. Let’s get into something more practical for our 3000 community members. They want to know more.

Tell us about the tokenomics and how individual investors like our community members can participate in and benefit from it?

Chris: Sure, Let me talk about our Genisis-Block 😄

5 billion CFX will be released which will be unlocked gradually as Conflux Network launches. This is the distribution:

There is so much to say actually, but here is a link if you want to know more about it: https://medium.com/conflux-network/conflux-networks-economic-model-pre-mined-token-distribution-and-proportions-f92fe00696ea

Everyone can participate in the ecosystem development, help Conflux grow and benefit from it.

If you are a developer, I recommend checking out the grants-program that we just launched here: http://grants.confluxnetwork.org/

And we do many events within our community and with other communities as well, people can participate in the ecosystem development and earn tokens

Blockcast.cc interviews BlockReview “Enables You to Value Assets of Tomorrow”

Blockcast.cc Interviews Bryan Daugherty “The true value behind is the blockchain technology.”

Blockcast.cc: Jenny Zheng Speaks to Paul McNeal-TALK ABOUT BITCOIN BUT DON’T TALK ABOUT YOUR BITCOIN

Crypto-Wednesdays No. 12A – David A. Johnston Interview

ABOUT US
Blockpaths paves the path for the future by sharing knowledge on blockchain technology and cryptocurrencies.
FOLLOW US
www.blockpaths.com
MORE STORIES