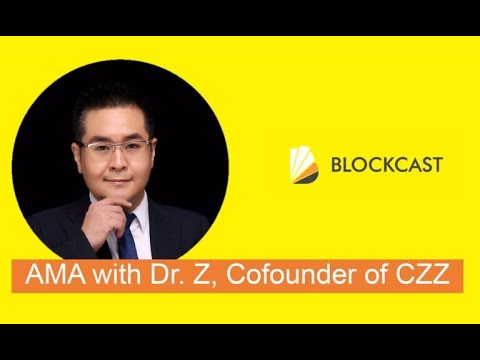 Blockcast.cc: The blockchain and crypto market have been changing. What do you want to see in the near future for this industry?

CZZ: Blockchain technology will provide for the necessary technological infrastructure to meet the needs of a decentralized world. I think we are still in the very early days of the blockchain industry, kind of like the days when Edison and Tesla were battling out on the war of the currents. The whole covid pandemic has pushed a lot people to work remotely; many of them would work from home long term. Twitter for example wanted to 98% of their staff work from home, Facebook 80%, even Goldman Sachs said they wanted about 50%. I think this will trigger off a new wave where atomic individuals control means of production.

We all know the Fed can just print trillions of dollars in a few weeks, and we can expect the USD to depreciate over the coming years. So smart people would be buying BTC right now, to hedge against inflation. What about their future income? They receive the same dollar income in their next payday! How can you hedge against that? The policy of quantitative easing to infinity is literally declaring war on the wage earning working class. So I think the great movement toward decentralization is only just starting, we will have an interesting decade ahead.

Perhaps you can imagine a world in the year 3000, when humans have more or less set up colonies around the inner solar system. Our current centralized financial system would appear in their history textbook in the same regard as medieval kings and warlords appear in ours.

READ  WallStreetBets Next MOVE!? They're Coming For CRYPTO!!

CZZ: As I was saying before, one of the biggest roadblocks for blockchain mass adoption is the extreme volatility of token prices. We know this is bound to happen because there is an inherent “unfairness” built in the economic structure of the ERC 20 token. Namely, the founders and private equity investors can obtain large amount of “premined” tokens for themselves, at an extraordinary cheap per-unit price. This would have an incentive for them to play a “pump and dump” scheme, they can sell their own token at extremely low prices and still make a profit, because it costed them nothing in the first place.

One way to avoid this is going back to the founding father Satoshi Nakamoto. When the bitcoin mainnet was first launched, there were precisely 0 BTC on the network. Every BTC was created from proof of work mining. Since proof of work costed money to run, it acted as a reverse filter mechanism. Those who did not believe the bitcoin they receive worth more than their power bill, would not participate in mining, and therefore would either not hold BTC, or they can only buy BTC from the market. This also provided deterrence for BTC holders to dump massive amounts of it, because everyone can agree on the replacement cost of the bitcoin.

Blockcast.cc: Share with us an inspiring quote for our readers. Eg “I believe in blockchain, it can change the world.”

Read the full article at https://blockcast.cc/interviews/blockcast-interviews-dr-z-cofounder-of-czz-decentralize-everything/

Growing DeFi with Chainlink and Oasis Virtual Meetup and Q&A

ABOUT US
Blockpaths paves the path for the future by sharing knowledge on blockchain technology and cryptocurrencies.
FOLLOW US
www.blockpaths.com